You never want to miss a Müller part, so we’re excited to have his latest one to share with you. We took the occasion to pick his brain for his thoughts on filming, music, snowboard movies, health and more. The interview wandered a bit off piste, but we always find Nicolas’ perspective interesting, so we highly recommend reading it to the end. When you get there, you’ll also find details on how you can win his new pro model board. But first, let’s watch the master do what he does best…

Hey Nicolas, your Isle of Snow part is such a banger! Seems like you found a lot of good snow last season. Where did you do most of your filming?
Haha… Thanks! It was another fun season, what can I say! I started to get a few clips in Laax and Melchsee-Frutt but the season wasn’t quite providing in the second half, so half of the riders in the lineup ended up at Shane Charlebois’ house in Salt Lake City. Utah was just going off until May! And last but not least, I made it up to AK to finish the season with a few lines at Alyeska, AK.

I can imagine… If you had to choose one shot from your part, what’s your favorite?
I think I’d choose the natural McTwist from Melchsee-Frutt. The bowl that we sessioned that day was a magical little zone. I wish I had the energy to keep hiking the sub peak where I dropped in all day long. In my dreams I was sure I could’ve boosted one more, even higher, but the one in the film felt really good too. A Natty McTwist is one of the best feelings for me.

So good to hear some classic Beastie Boys in a snowboard film again. Any particular reason why you chose Root Down for your part?
We had been struggling a bit during the editing to find a good song for my part this year. At some point point Shane threw Root Down in the mix and, obviously, the energy of the track, and Beastie Boys in general, goes really well with snowboarding. The rough edit felt insane but we were almost sure that we’d never get the rights to the song. Anyway, one evening Shane went for a surf break from editing and ran into Rip Zinger, who later got to peep the edit. And he was like, “Do you want me to call Mike D and ask him? I taught his kid how to snowboard and he loves to ride as well!” Sure enough, Mike D answered and was like, “Nicolas Müller’s part? Of course! Nico and Terje are my son’s favorite riders.” In the end, we still had to license it through the record label, but it was pretty awesome to get the approval from Mike D himself!

Wow… I knew that MCA was super into snowboarding, but I didn’t know that Mike D shredded too. That’s quite the endorsement! Thinking about those guys is a real throwback to some great days for snowboarding in the 90s. But attention spans seem to be shortening these days… Why is being a part of a full snowboard movie still special for you?
No shit. It’s crazy and it feels like nobody’s got time anymore. It’s a false advertisement from the smart phone companies. They’re supposed to help you, and save time. But instead, they steal our time away from our real life. So I think that taking a break from all of the swipin’ and likin’ is important. It’s just good to pour a drink, maybe get some KinoHanf and put on a good old shred movie on the big screen. Something you’ll remember the next day, you know?

Absolutely! And still, through all the changes in media, it’s crazy to think that Absinthe is still here and that Isle of Snow is their 20th film. How many video parts have you released now?
Yeahh that’s a huge congrats to them! And you know people are hating on it being the same shit every year, expecting some Art of Flight, or a crazy whack story line. Absinthe stands for going into the wild snowy mountains and just capturing what the snowboarders of the hour like to do. It shows their progression from a rider’s perspective. That’s all you need: a crew that’s motivated everyday, with the priority of getting the best shots possible.

Imagine, on the days when the conditions are perfect and you feel like you can push your limits, some Red Bull office jock tells you, “today we’re doing interviews” or, “film this lifestyle crap for the story line.” Ahhh… I need to get after it with down to earth rad humans and the best way to make that happen is to just to be out there as much as possible! That’s how you get a banger part that people will remember the next day. Snowboarding’s funny and times are changing but one thing will never go away…  the classic snowboard movie! Less is more, thank God!

Damn. How is it that you never seem to get hurt? Is there something special about those bird bones of yours?
Haha yeahh… hollow bird bones. Well, I think it has to do with what you eat and drink! My Mom always stressed the importance of eating well to me. I’ve been a vegetarian since the age of 10 and growing up, I only ate organic food at home. Traveling the world, I started to pay attention and to choose organic stores over mass supermarkets.

Any specific recommendations for young riders about how to send it and still stay healthy?
Eat food that has nutrition! Greenhouse vegetables, for example, have energy but not nutrition! Organic stores carry the highest quality foods, so I would highly recommend those. And be careful of processed foods and monocultures like soy and wheat. I would recommend only eating ancient grains, like rye, spelt, emmer and kamut, for example. Those have a a different structure, or vibration.

Eat hemp as much as you can. It’s the best protein. Protein is a term that’s actually totally unnecessary, because all that it stands for is the amount of amino acids. Something with 9 amino acids, as well as 14, like beef, for example, can be called protein. So if you really care about “protein” then a great source is the hemp nut, which contains all 20 existing amino acids, plus the essential unsaturated fatty acids in an ideal combination.

Another big one that I’d recommend is mushrooms. Did you know that humans share over 40 % of our DNA with the kingdom of mushrooms? So back to your question about sending it and staying safe, if your body is too acidic, it’s just a matter of time till you break. Drink Chaga in warm to hot water daily and you will be more alkaline, on the safe side of PH Levels! P for probability distribution and H for Hydrogen atoms. So therefore, stay hydrated and keep breathing, ha!

It seems like you’ve gone pretty deep on your research into diet and health. And it definitely looks like it’s working for you! So is it the hemp, or the shrooms that will help me learn how to do a Natty McTwist on a wind lip?
Now that I am a partial owner of AlpenPionier, which makes Swiss organic Hemp Foods, and Mamaloha, which offers medicinal mushrooms, I learned so much and discovered some of the missing links about nutrition for myself. The way we cultivate our food, especially agriculture, is a nightmare for humans, animals and Mother Earth. All of these man made seeds don’t replenish the soil with carbon anymore, so the soil is empty and we have to use artificial fertilizer. Plus, they don’t work as a monoculture, so we have to treat them with poisonous pesticides. Again, the crops grow and they are full of poison ( which kills life! ) and they lack nutrition, because artificial fertilizer is not nutrition for living beings that are based on the same elements as all natural beings, which are carbon, hydrogen and oxygen. If a tree would consume something that it’s not made of, it would lose it’s leaves within 5 days! Only humans are stupid enough to create synthetic foods or Zombie Foods… call it what you want!

Hemp opened my eyes to this, because in 90 days of growing from a seed to a 3 meter plant, hemp offsets more carbon from the air into the ground than anything else out there. The seed, which is a nut, is a superfood. And again, it replenishes the soil with carbon, so that farmers can grow other crops the next year that will be rich in nutrition because there’s lots of carbon in the ground! So while we cry about CO2 and flying, we should eat food that restores and respects the cycles of these elements! For your health and Mother Earth.

Speaking of super foods, we’re pretty excited to hook up one of our readers with your new pro model. We’ve been asking people to identify all of the fruits and veggies on your base graphic and the answers have already been pretty entertaining. Can you tell us a little more about the new Müllair?
Oh man, I just got down from the mountain, doing that beautiful, fun activity called snowboarding. I was looking down at my Müllair, thinking that quite a few years went into making my board into what it is now. It’s got a sexy side cut to handle it all quickly, on the go. It’s got a good sized nose, even a Schnaus, makin’ it smoother to land. And the early rise on it makes it feel like a shorter board. Also, there’s reduced mini Magne-Traction, which is good for days like today, when it’s rather icy out.

Someone’s gonna be pretty stoked to win that one! And while we’re talking about gear, I also heard that you’ve got some new pro model bindings with Bent Metal. Are there any features that make those special?
YEAHH I am so happy to have the full Mervin set up now. The CorPro is easily the best bindings I’ve mounted to my board. The high backs are perfect and the drive plate is genius! And you know you won’t be able to break the Bent Metal.

Nice! So what’s your plan for the rest of this season?
Just to ride at home as much as possible and go with the Flow mostly… Fun is essential! The 6th Sudden Rush Banked Slalom at LAAX is a sure thing though. ThirtyTwo’s doing a team video, so I wanna be part of that, and then I’ll link up at the Absinthe Frontier. And maybe there might be something special coming soon too, but I won’t say too much.

Sounds like another amazing winter… Thanks for your time Nicolas! Anything else you’d like to add?
Yeahh thank you! And thanks for reading out there. The only thing I would add is to check out the books of and about Viktor Schauberger and Nikola Tesla <3.

WIN A MULLAIR!
Nicolas’ new pro model may be built for buttering, but the base graphic is 100% vegan. Identify all the fruits and veggies you can see on the base and email your answer to win@whiteout.ch for your chance to win. 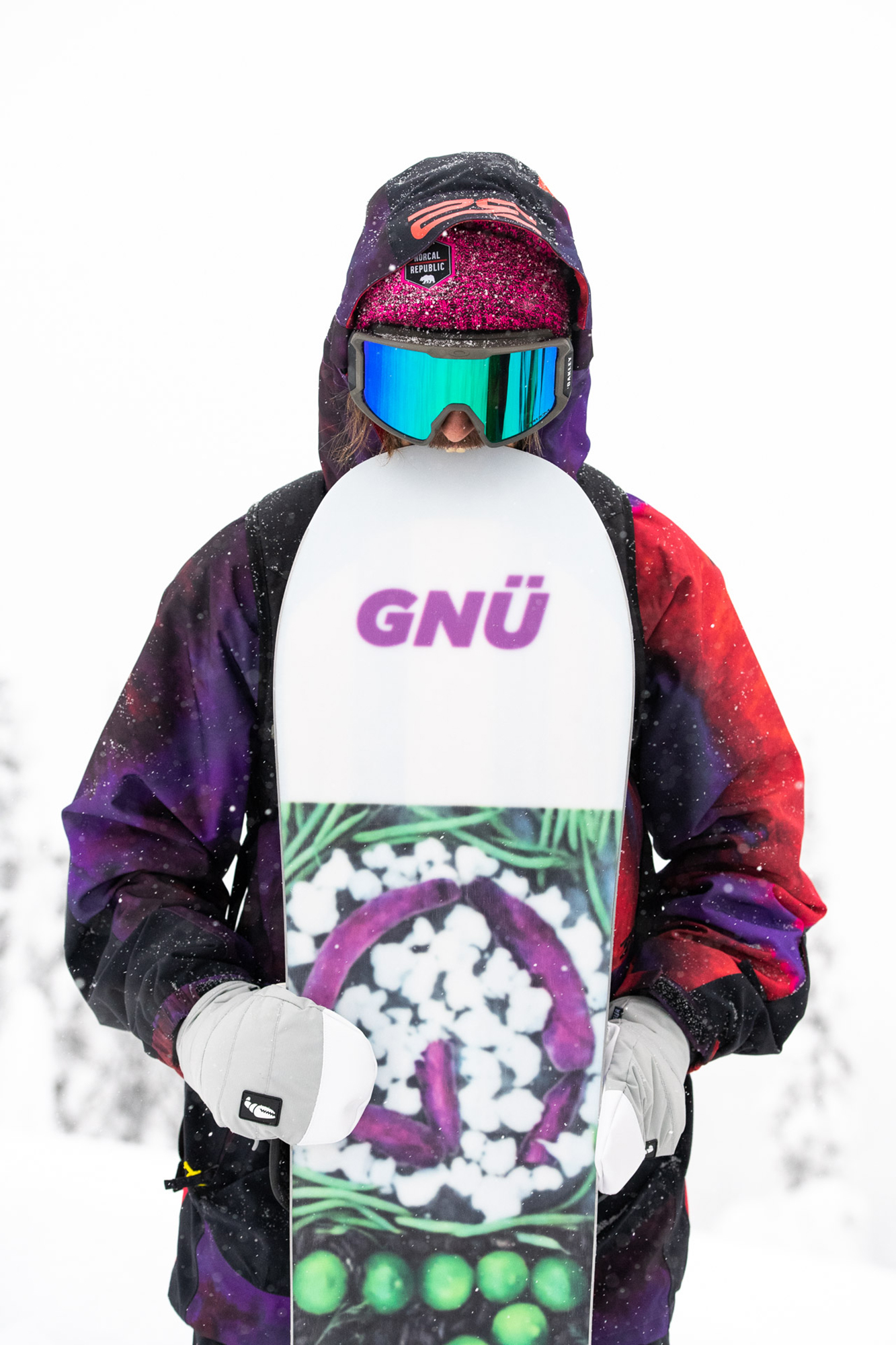 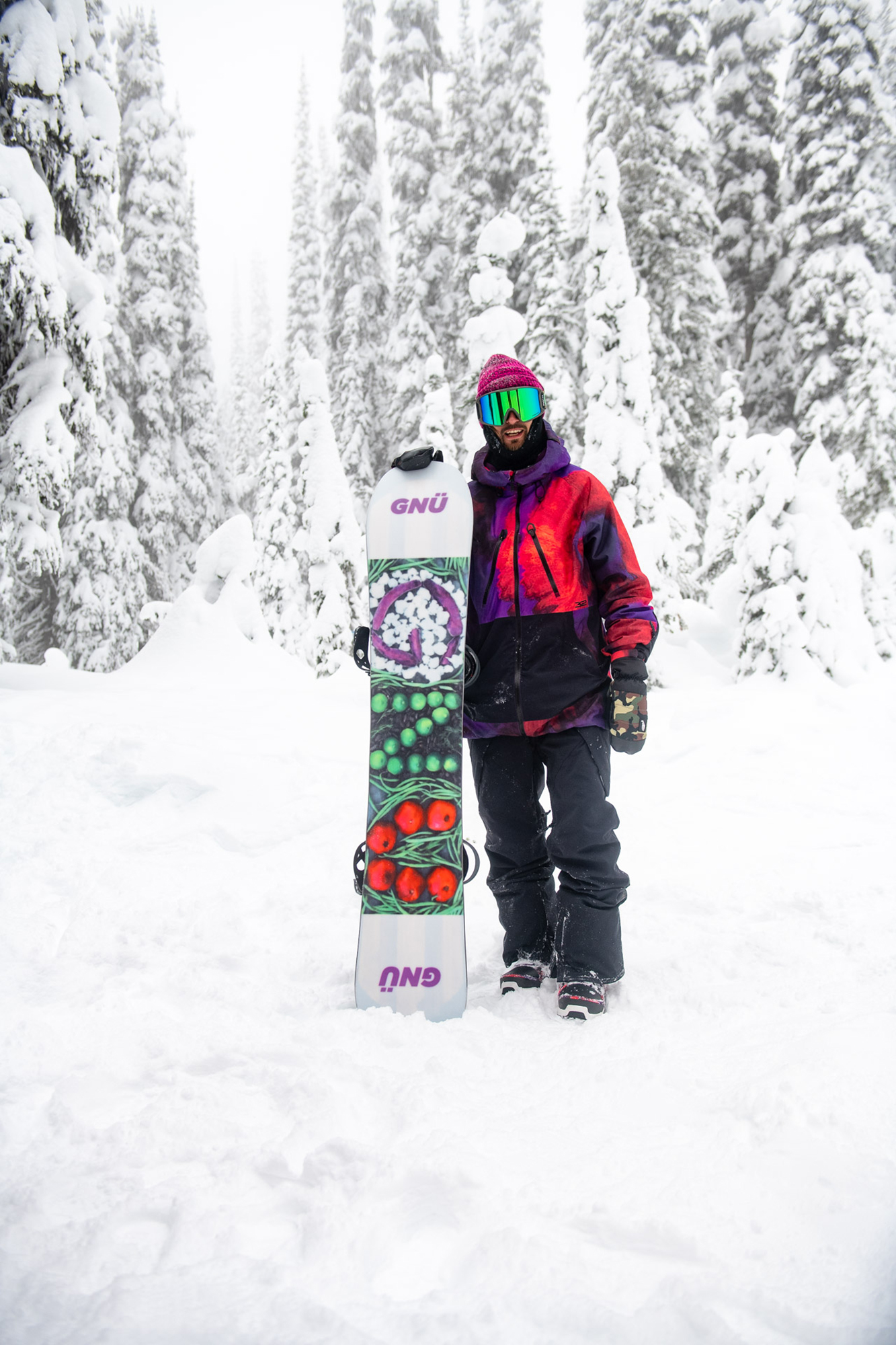 Good food and good pow is all you need to feel good! © Tim Zimmerman

Big thanks to the photographers and to Absinthe Films for making movies like this. If you don’t have a copy of Isle of Snow, be sure to get one here.