One thing we like about Banked Slaloms is that they’re accessible to riders of every level. It’s also a great excuse to bring together multiple generations for good times and hard turns on the mountain. Since Melchsee Frutt is hosting its annual Banked Slalom this coming weekend (Jan 28th), we caught up with Fruttpark shaper Lukas Spichtig for a chat about the history of the event and what we can expect this year. Keep reading, get psyched, and go sign up for the race here or on-site on the day of the event.

2018 will mark the third edition of the Banked Slalom, what motivated you guys to organize an event like this in the first place?
It all started in a meeting with the Central Station Freestyle Team and Audi Snowboard Series. We discussed the possibility of organizing an event for the Audi Snowboard Series and a Banked Slalom was the only discipline they still didn’t have in their calendar. By chance, the terrain in Melchsee Frutt is nearly perfect for it!

How has the event progressed since it started?
It definitely became bigger. After the first edition, the idea was to develop it further into a real concept. With the concept came more sponsors and the event also started to attract more professionals.

Let’s hope the crowd will be present and pumping too! Is the course the same, or do you change it each year?
There are 2 couloirs that fit well for the course. We choose where we build it, depending on the snow conditions. We tested both options and this year we’re building the course like we did in the first edition. But the snow conditions are definitely better than last year!

Yes, good thing they are! It’ll make the race even more fun! How many people, and how long does it take to create the course?
To build the course, it takes about 1 week and 5 people. During the Event 20-30 people make it happen.  Cheers to all the volunteers and the Fruttpark Shaper Team — without them the event wouldn’t be possible!

So, if you had to bet on a local rider, (male and female) who would you pick to win?
I would go with Lis Eberle in the women’s category. She’s from Lucerne and she won both of the last two editions.

In the men’s category, I would bet on Thomas „Goldi“ Coldebella. He’s a good friend of ours and he was in the top five for the last two years. But it’s going to be hard to beat Guido Van Meel. He is the course designer and the official from Swiss Snowboard. He also won last year’s edition.

Aside from the race, are there other things planned?
There is a free training session on Saturday for the first time. On the day of the event, there is also a chill area with food and drinks. And apart from the banked slalom you also have a Boardercross and the Fruttpark with over 30 obstacles on the same lift.

Yeah, for sure, that’s the most important. Anything you’d like to add before we wrap up?
We want to thank all the volunteers and sponsors! Let’s hope for good weather and that many people will sign up. It will definitely be a cool event!

Thanks for your time Lukas! If anyone’s looking for more info, it can probably be found here. 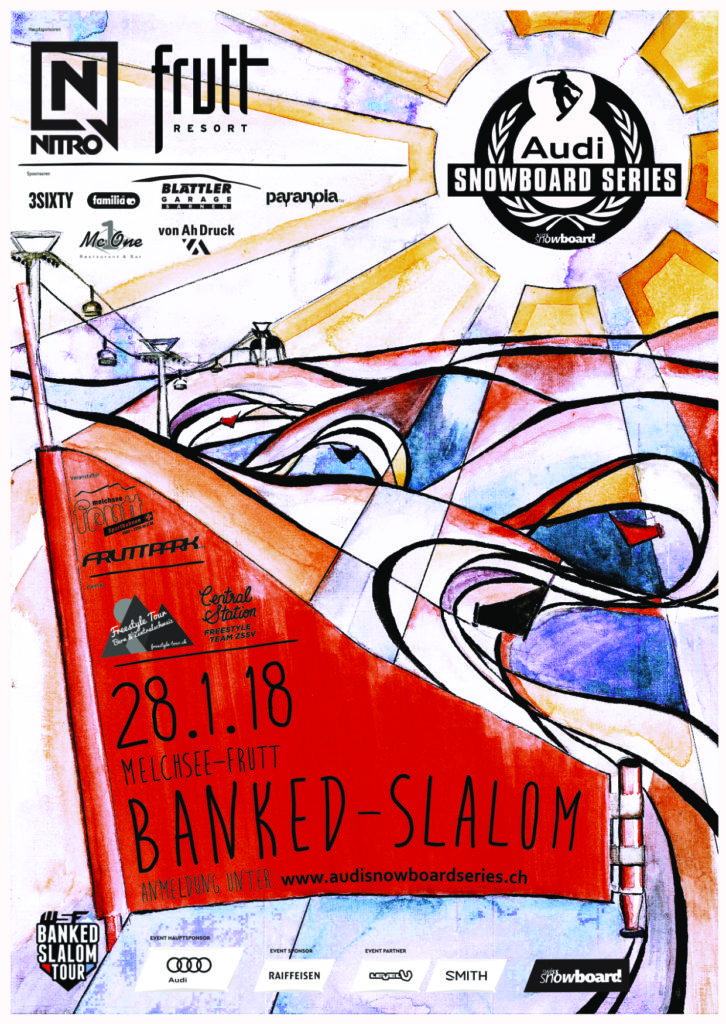